The Alchemist has just returned from the summer days of Estonian Copy Editors’ Association (Eesti Keeletoimetajate Liit, ECEA). During the two-day event (held on 30th-31st August) in the magnificent Olustvere manor, several vital issues were discussed.
After arrival and settling in, the participants were divided into two groups and got to try out either pottery or glassblowing. Though in reality, the Alchemist had experience with neither (sic!), I decided for the pottery class (picture of my down-to-earth, sans-handle cup to be added later on).

Lunch was followed by a seminar, where we considered the results of a previous questionnaire regarding the professional standard for copy editors. The next item on the list was a workshop on copy editing textbook – what should be the main chapters and most important subjects. After that, an overview was given regarding the progress made by the Clear Language work group.
The highlight of the day was undoubtedly the analysis of the copy editing FAQ (by H. Mäekivi). The following general discussion lasted well into the late hours of the day.

The next day saw a tour around the most significant sights of the manor, followed by a group picture and a ride home.

Here are the participants (spot the Alchemist!) 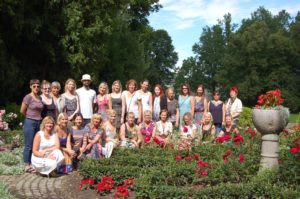